Doris McCarthy was an acclaimed artist, writer, teacher, mentor, and beloved friend. Since her passing, McCarthy continues to be an inspiration to countless Canadians who have recognized her as one of the most cherished interpreters of our rugged landscape.

McCarthy was born July 7, 1910, in Calgary, Alberta and spent her youth living in the Beaches area of Toronto. In 1926 she earned a scholarship to the Ontario College of Art (OCA) where she was mentored by some of the premier Canadian artists of the early twentieth century, including both Arthur Lismer and JEH MacDonald. Soon after graduating from OCA in 1930, McCarthy’s works were exhibited in the 1931 Ontario Society of Artists’ (OSA) Annual Exhibition. She achieved her membership to the Society in 1945 and later went on to become OSA Vice President from 1961 to 1964 and President from 1964 to 1967. She would continue to establish her position as one of Toronto’s major emerging artists to be later recognized as one of Canada’s foremost landscape painters.

Doris McCarthy has received many awards and distinctions throughout her career. Holding memberships in the Royal Canadian Academy of Artists (1951) and the Canadian Society of Painters in Watercolour (1952, and for which she served as President from 1956 to 1958), earning five Honorary Doctorates from five different Canadian Universities from 1995 to 2002, and inductions into the Order of Ontario (1992) and the Order of Canada (1986), her place in the canon of great Canadian artists has been solidified. McCarthy was also a lifelong learner and graduated from the University of Toronto Scarborough in 1989 with an Honours Bachelor of Arts degree. A passionate writer, she penned three autobiographies chronicling her life: A Fool in Paradise, The Good Wine, and Ninety Years Wise.

Though immersed in the dedicated pursuit of her creative passion, Doris McCarthy always made time for others. She was often surrounded by close family and friends, and shared her zest for life, painting, and effervescent conversation. McCarthy’s sense of adventure and her compassionate encouragement of others created a personal aura dating back to her days as a Canadian Girls in Training camp counsellor, to her forty years of teaching art at Toronto’s Central Technical School (1932–1972), and continuing throughout her lifetime. Yet, mirrored in her amiable sociability was also a great appreciation of solitude that McCarthy found while painting landscapes around the world. During 1951, on sabbatical, she spent a year painting full-time in Europe. Doris also embarked on a solo tour in 1961 to Asia, painting in locations such as Thailand, Cambodia, India, Afghanistan, Iraq, and countless other countries. However, it has always been Canada that figured most splendidly and most often in Doris’s work and in her affections. Some of her early painting trips involved adventures in Muskoka, Haliburton, Georgian Bay, and the Arctic with groups of other devoted artists. Using primarily thick oils and watercolours, McCarthy developed her unique style during her explorations, investigating hard-edged angles, form, and colour with a skilled and bold hand.

When the Doris McCarthy Gallery opened at the University of Toronto Scarborough in 2004, McCarthy stated that the honour was the climax of her professional career. She responded in kind by promising a major selection of her paintings for the Gallery’s Permanent Collection. On the occasion of McCarthy’s hundredth birthday in the summer of 2010, the Doris McCarthy Gallery celebrated with Roughing It in the Bush, a spectacular exhibit curated by Nancy Campbell and co-presented with the University of Toronto Art Centre. McCarthy actively participated in the exhibition’s creation by offering her creative knowledge throughout the planning process. Upon seeing an advance copy of the exhibition catalogue, she clasped the book to her chest and declared it “a triumph!” The exhibition’s opening festivities — including a heartfelt rendition of “Happy Birthday”— were recorded and McCarthy was able to enjoy the events through a live video feed that she viewed from Fool’s Paradise, her home atop of the Scarborough Bluffs. Doris McCarthy’s personal and artistic legacy is unparalleled, thanks to her ground-breaking artistry and the amount of dedication and heartfelt passion with which she lived her life.

From her condensed memoir My Life, Doris McCarthy reflects upon her personal journey:

“So here I am, content to enjoy every day as it comes, and wise enough to thank God for his mercies and rejoice in them. My only regrets are my economies (never my extravagances) – particularly those of spirit and love.” Doris McCarthy working in the garden at Fool's Paradise, 1943 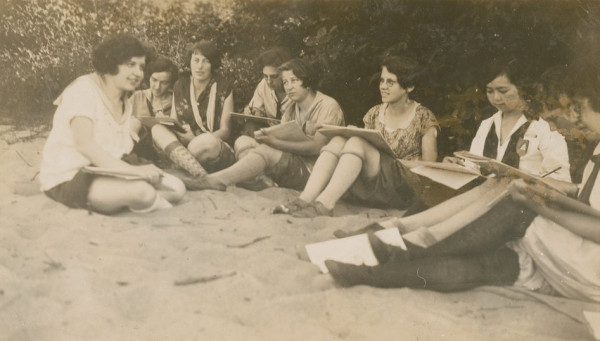 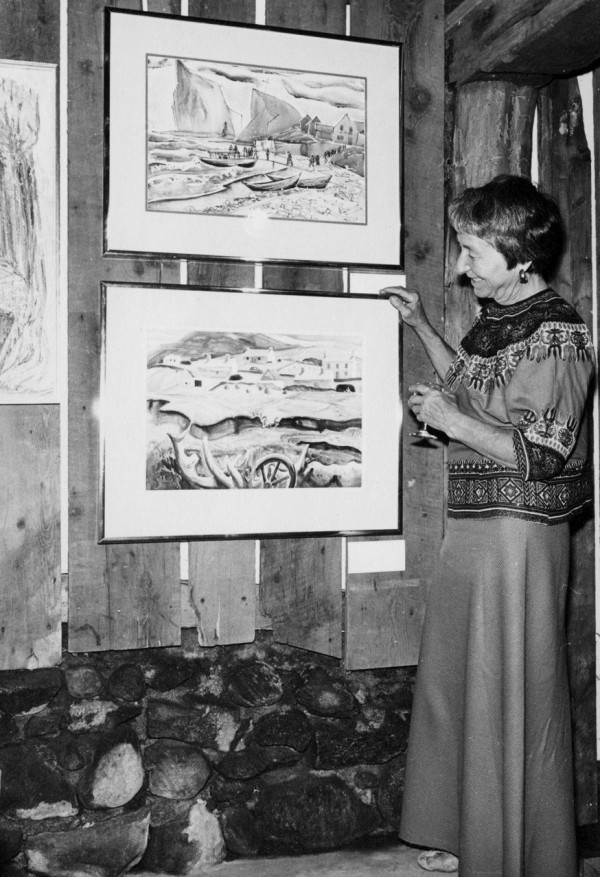 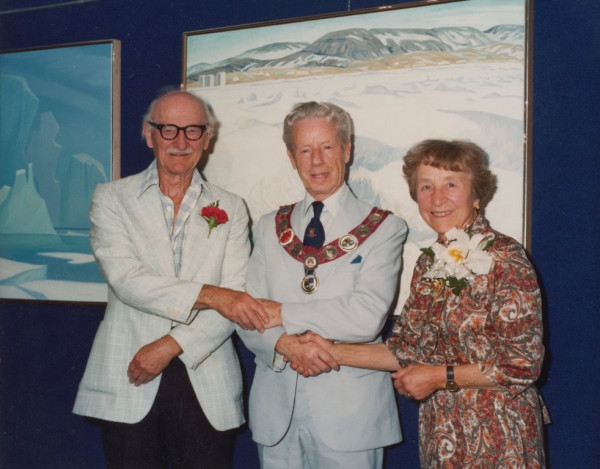 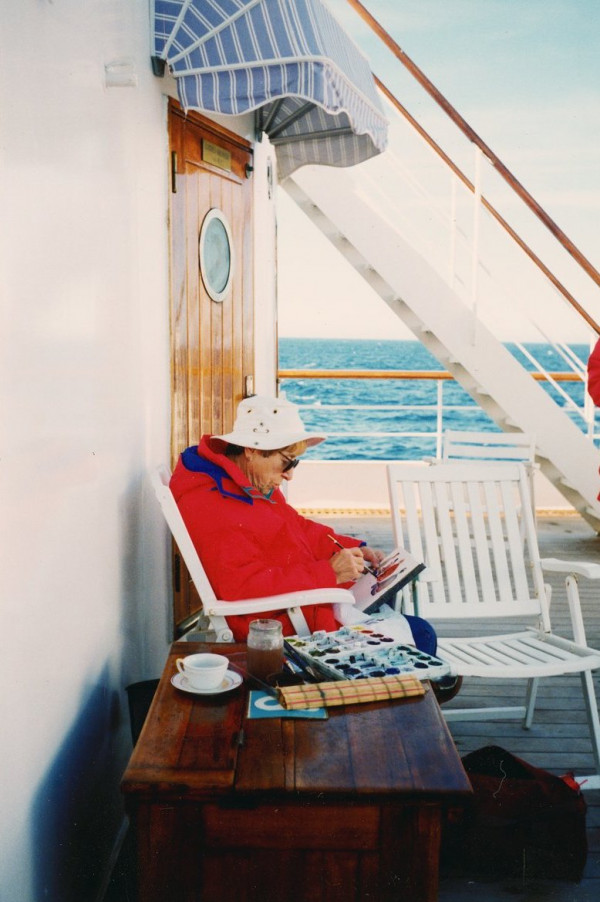 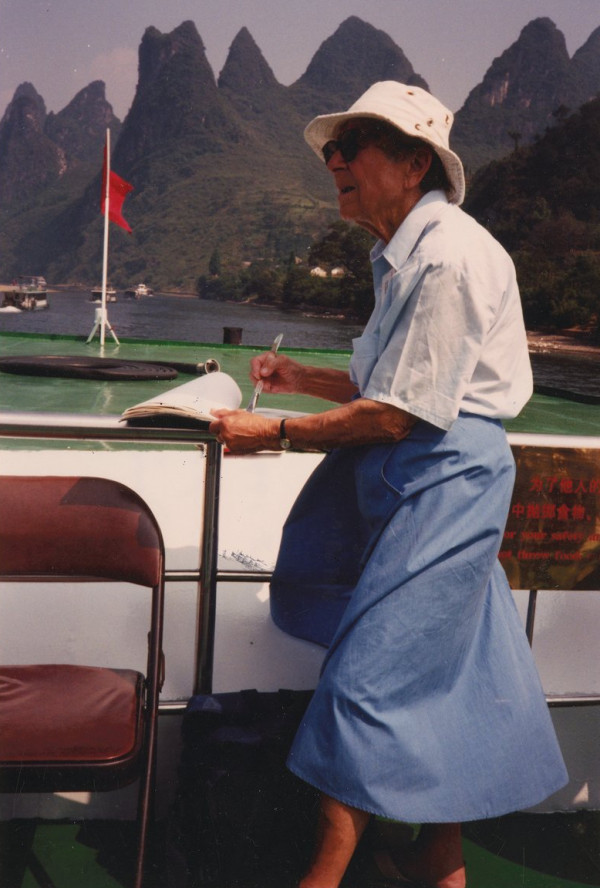 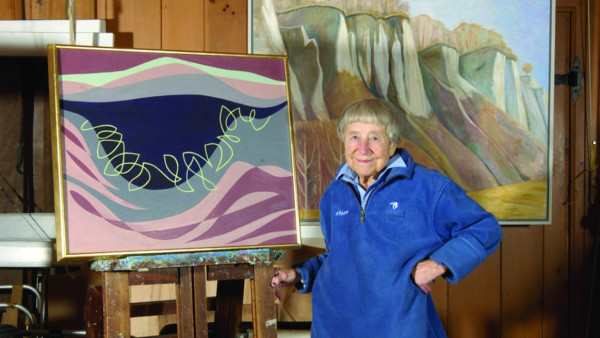 McCarthy in the studio at Fool’s Paradise, 2003 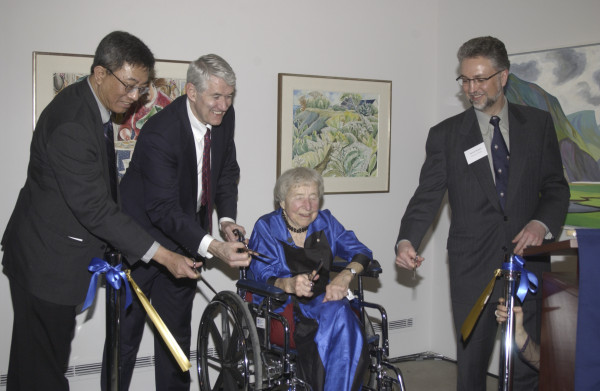 Doris McCarthy cutting the ribbon to the DMG at the opening reception, March 2004

1926: Earns full-time scholarship to the Ontario College of Art (OCA)

1930: Graduates from the OCA and begins work teaching children’s classes at the Art Gallery of Toronto, a position she will maintain until 1935

1931: With her mother in hospital, McCarthy paints the view from her hospital window and enters it into the Ontario Society of Artists (OSA) Exhibition. Her work was accepted and exhibited in the 59th Annual OSA Exhibition

1932: Began working at Toronto’s Central Technical School and continues teaching here until 1972. She also began studies at the Ontario College for Technical Teachers in Hamilton, graduating in 1933

1935: Travels to England with friend Noreen (Nory) Masters and begins postgraduate studies in painting at Central School of Arts and Crafts, Long England, and continues until 1936

1946: Winterized Fool’s Paradise and moved in

1951: Elected associate of the Royal Canadian Academy of the Arts (RCA)

1952: Elected member of Canadian Society of Painters in Watercolour (CSPWC)

1956: Elected President of CSPWC, continues as president until 1958

1961: Elected Vice President of the OSA, continuing as vice president until 1964. McCarthy also embarked on a solo tour starting in Japan, then travelled to places such as New Zealand, Singapore, Thailand, Afghanistan, Iran, Turkey, and Greece

1964: Elected President of OSA, continues as president until 1967

1972: Takes first trip to the Arctic with fellow colleague at Central Tech, Barbara Greene, beginning many trips to the north to paint

1974: Is elected academician of the RCA

1976: Begins courses in literature at the University of Toronto Scarborough

1986: Appointed Member of the Order of Canada

1989: Receives Honours B.A. in Literature from the University of Toronto Scarborough

1990: Wrote her first autobiography A Fool In Paradise: An Artist’s Early Life

1991: Wrote her second autobiography The Good Wine, and worked in a print shop with George Maslov in St. Johns, Newfoundland, learning lithography

1996: June 4th is declared “Doris McCarthy Day” in the City of Scarborough

1998: Receives Honorary degree of Doctor of Letters from Nipissing University and is declared an Honorary Life Member of the Society of Canadian Artists (SCA)

2010: In honour of McCarthy’s hundredth birthday, Doris McCarthy: Roughing It in the Bush, an exhibition curated by Nancy Campbell, opens with McCarthy in attendance. On November 25, Doris McCarthy passed away peacefully at Fool’s Paradise at the age of 100 years old.

The establishment of an art gallery here that is worthy of the University of Toronto on the Scarborough Campus is a great joy to me and to everyone within this part of Greater Toronto. That it should carry my name is an honor that is the climax of my professional career. I am full of gratitude to those who chose the name, and happy to give to the gallery a body of work as a start to its permanent collection.

My original ambition to become a professional artist and particularly an interpreter of the Canadian landscape began under the influence of the Group of Seven while I was still in my teens. Later, when I was teaching senior art students, I felt impelled to explore abstraction, minimalism, colour field, and other fashions of the day. My work still reflects some of the disciplines I learned in these exercises. But my inspiration remains the landscape, not what any other artist has said about it.

It is always the natural world around me that drives me to paint. I grew up loving wild country and believing that wilderness was beautiful. My sight is the sense that is strongest and most demanding, but smell is also important to me; the marvelous tang of cold fresh air when I go out into a snowy world, the whiff of wood smoke, the combination of smoke, bacon, feet, and wool that lingers inside every northern village home all excite me. And the smell of oil paints and turpentine is delightful. I react emotionally to the cry of a loon or the shriek of a blue jay or the sound of ice cracking in the sub-zero cold.

I soon learned to broaden my range of enthusiasm and to embrace the works of man. The cluster of high-rise office buildings in Toronto is beautiful in morning light, and farm and village groups tempt me. I travel to rural places in Canada and overseas as well as to the sea, the mountains, the prairies, the badlands, and the high Arctic or Antarctic to get my inspiration and especially to get the detachment from the normal responsibilities and distractions of my daily life in the city.

The sketches, photographs, and memories that I bring back from a painting trip give me material for painting large works in the studio. I plan a large canvas in thin acrylic paint: quick to dry, easy to change. This is the most critical stage. I am creating something that must have a life of its own, able to give its energy back to me. When is this underpainting finished? When I can see on the canvas the pattern, the tones, and even the colours that are right and that make me eager to get on with it in oil paint.

When I have “finished’ the canvas according to the plan I have worked out in my underpainting, I live with it for days and weeks, waiting to be sure that there is nothing bothering me about it, nothing that sticks out and hits me in the eye.

On-location paintings are only finished when I have brought them indoors and lived with them for a while and made the necessary revisions. The pressure of time, the discomfort, and the excitement that are part of outdoor painting prevents completion on the job.

Every painting that I do is done with passion and with love, not only of the subject but of every step in the process. To me the real question is whether it speaks to you, the viewer, and enables you to share that experience.

Excerpted from the catalogue accompanying the exhibition Everything Which Is Yes

Print sale and fundraiser for the Doris McCarthy Gallery