Popular culture has long played the role of constituting public memory by creating and invoking iconic images and stories that stick with us through time. The genre of World War II film is dominated by tales of men at war, and I was curious to hear stories, beyond those of notorious Mata Hari figures, of seemingly ordinary but active women during wartime. So recently I have seen a number of popular movies about women in the British secret service during WWII. In Charlotte Gray, Cate Blanchett’s character is an amalgam of real-life women spies sent into Occupied France, Kate Winslet in Enigma works as a code breaker at Bletchley Park, and in the 1958 classic bio-pic Carve Her Name with Pride, Virginia McKenna portrays the life of agent Violette Szabo.

My triptych of feminist war films represents a necessary and often missing part of the stories we hear, tell and perhaps remember, however, they are but partial representations of lives lived. As a work of and about public memory, Nina Levitt’s interactive media installation Little Breeze considers the inadequacy of representations of history and the presence of women spies during WWII. Through this work, Levitt brings awareness to often ignored histories while also exploring the constructed and always unfinished nature of historiography.

For its exhibition at the Doris McCarthy Gallery, Little Breeze consists of three parts. In the central element of the work, viewers enter one of the galleries to see a large video projection of a field of shimmering ASCII code — a standard computer code that represents letters as numbers, making it possible to exchange data between computers. As one watches the projection, a portrait of a woman emerges from the screen of code; moments later, it disappears back into abstraction and then another portrait emerges and disappears, and so on. Sixteen vintage suitcases sit throughout the gallery in front of the projection. Viewers are invited to pick one up, which triggers a sound clip to play through a small speaker near the suitcase handle. The audio clips are from the film Carve Her Name with Pride, which is about the life of agent Violette Szabo but has come to stand as emblematic of the lives of other female spies.

Very briefly, as the film tells the story, Violette Bushell was the daughter of an English father and a French mother, who lived in London in the early years of WWII. She met a handsome French soldier, Etienne Szabo, in a park, and they fell in love, married and had a baby. Etienne went back to war, and Violette soon received a telegram informing her of his death. Shortly after, Violette was approached to join the Special Operations Executive (SOE, a British intelligence service formed in 1940, after the fall of France, to foster and aid resistance among the civil population in Nazi-occupied Europe). Thirty-nine SOE women were sent into Occupied France during the war; many of them did not survive. At the age of twenty-three, Szabo, code-named Louise, was sent into Occupied France for two missions; she was captured and sent to a concentration camp, then executed just months before the end of the war.

Eight of the suitcases in the Little Breeze installation contain audio clips that give us different moments of Szabo’s story as told through the film. If viewers are compelled to open the suitcase, they are rewarded with a corresponding video clip that emerges from the field of ASCII code, giving us another dimension to Szabo’s story. When the suitcase is closed, the video eventually reverts back to the series of portraits and computer code. Encouraging viewers to become active participants in gathering fragments of information and decoding images, one’s relation to the movie narrative becomes one of engaging ephemera. There is a specific texture to the interaction that this work demands – it is the texture of memory but also of mystery. As images flash up and stories unfold, we get an impression of the past while also touching on a possible future as we imagine new knowledge might emerge to engage with.

Juxtaposed with the experience of the Little Breeze suitcases are two text installations that show Levitt is not satisfied with engaging only the film biography of Violette Szabo, whose specific story might be seen to stand in for those of all female spies. Levitt, trying to individuate the particular experiences of SOE women, supplements our fragmentary knowledge with text taken from documentary sources.

In a small gallery opposite the suitcase room, text that emulates the look of Teletype tape lines the walls and is punctuated by small photographs – portraits of the same women that emerge from the ASCII code. The text and photographs circling the room constitute short biographies of nine British SOE agents who worked in Occupied France. Wall-mounted speakers play the sound of a Morse code radio transmission. The sound is interactive; as viewers move through, reading the biographies, the soundtrack changes: the voice of Maurice Chevalier singing “Louise” emerges from the code. His lyric “every little breeze seems to whisper Louise,” Levitt’s reference back to Szabo’s code name, is a sweet reminder of the quiet but important role these individual women play in popular memory about the war.

The third element of Little Breeze occupies the gallery vitrines: a text work offering further knowledge about the lives of SOE women. The texts are excerpts from service records of women in SOE F-Section (F for France). One of the records describes Szabo during her intelligence training as “a quiet, physically tough, self-willed girl of average intelligence. Out for excitement but not entirely frivolous. Has plenty of confidence in herself and gets on well with others. Plucky and persistent in her endeavors. Not easily rattled.” One gets a less romantic picture of Szabo here, a portrait likely drawn by a male military superior, questioning her abilities and intentions.

If popular film subsumes the proper names of real lives into a trope, here the trope of the female spy, then perhaps further layers of evidentiary documents and the information they hold more fully commemorate individuals. Of course, in and of themselves these documents act as ciphers and can tell only a partial story. As with all memorial practices, the lives represented in Nina Levitt’s Little Breeze do not speak for themselves. They are mediated by structures that ask us to read, look and listen in particular ways, determining how we engage the lives of those who came before us. Inciting an intimate and interactive relationship with layers of imagery, language and metaphor, Little Breeze prompts a desire to seek out and actively engage with the life of another, not as a finished project or a complete dossier but as an ever-unfolding story whose memory is always incomplete. 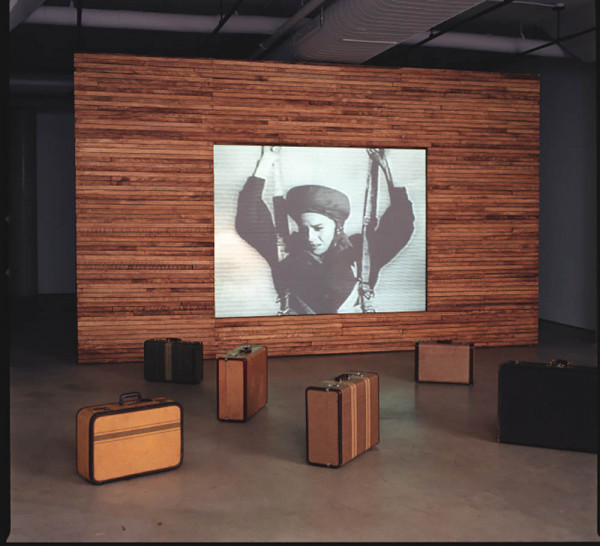