The Pillars of Scarborough: Gods Among Us

The streets of Malvern are quiet. Only a couple of folks are walking around the neighbourhood; everyone else is either at school or work. I wait at the traffic lights before crossing the street; in the distance, I can see the tall, green pointed arch marking the main entrance of the Malvern Town Centre.

The buzzing sound of people fills the area in front of the mall. The parking lot is packed with cars, some driving in circles looking for an empty spot. Ahead of me, the green arch stands as a landmark. It invites me to the front of the mall, where I can smell the McDonald’s, and see people going to the gym and others going to the grocery store.

No matter what language you speak or what country you are from, Malvern Town Centre is like a community centre; everyone who lives in Malvern is familiar with it. Malvern is one of the many neighbourhoods that make up Scarborough, home to many immigrants, and the mall is a place people go to get their groceries and where students hang out during lunch period. With many stores selling affordable products, the mall is accessible to those with low incomes. Many of the cashiers and workers at the mall are people of colour and immigrants. Every day you can see groups of older men sitting on benches, catching up with one another in their mother tongues.

Growing up in Malvern, I never felt like an outsider in my neighbourhood. I fit in with the rest of the kids at school who shared similar skin tones to mine, and I had friends with different ethnic backgrounds. Finding halal food, or food from other racialized cultures, was no problem. This neighbourhood was the one place where I didn’t feel like a minority but part of a majority. Malvern truly encompasses the essence of diversity. However, this isn’t how the media portrays Malvern. Instead, it is labelled as a racialized community with high crime and unemployment rates, which is far from the whole truth.

Esmond Lee, a second-generation Canadian, uses photography in his practice to capture Scarborough’s sense of community. In his work Gods Among Us, he draws from his background in architecture to showcase the many places of worship across Scarborough and unites them into one integrated work. Presented on the structure that stands at the entrance to Malvern Town Centre, photos of different places of worship highlight the many communities that make up the population of Scarborough.

Growing up, Lee’s family found a sense of belonging within their church: as Lee says, “It was difficult for my parents who came to a new country and didn’t have many friends or family. They didn’t know how to navigate through this place. The church was a place to learn these skills.”1 Lee’s family’s experience shows how the church can be not only a spiritual home but a place of unity, where strangers share a common ground and welcome each other with open arms. For many immigrants, places of worship provide familiarity. Mosques, churches, synagogues, and temples can act as central hubs to help newcomers navigate their new homes.

The majority of Scarborough’s residents are immigrants – as of the 2016 Census Report, 56.6 percent. Since Scarborough is a relatively cheaper area compared to other parts of Toronto, and racialized newcomers generally earn a lower income, many immigrants have moved here with their families. Lee says, “Canada is a place of migration and supposedly open-armed, but in the end, they don't offer a lot to assist immigrants. In a way, places of worship have been informal places to act as ushers into Canada and fulfill the role that the government isn't fulfilling.”2

Each photograph in Gods Amongst Us shows how these places of worship are woven into the fabric of the suburbs. Each of Lee’s landscape shots shows more than just a building, but how that building fits into the bigger picture of its community. Many of them are older buildings which have been repurposed. They don’t stand out; they blend in with the buildings around them. They are lower to the ground, camouflaged with dull, greyish brick. On the other hand, there are a few are more immediately identifiable as religious buildings. Ranging from a mosque with a minaret that can be seen from afar, to a Pentecostal church tucked into an industrial plaza, to a motel repurposed as an Islamic Center, Lee captures the variety of architectural settings that these holy sites inhabit.

As someone who has lived most his life in Scarborough, Lee approached this project by taking his camera and walking through each neighbourhood. Lee has said that while he was taking the photographs, people seemed to watch in curiosity. Scarborough isn’t known to be a place that draws tourists and so to see someone taking photographs of these buildings was odd. Many people only see Scarborough in media stories that align with its negative stereotype. This makes it difficult for people to see the true beauty within Scarborough.

Looking at each image, I recognize many of the buildings. In fact, within Lee’s photos, they begin to reveal more of their own individual auras. I pass these places every day and never stop to truly look at them. Recontextualized by this installation at the mall, they become more than just pictures. Together, they become a beacon, drawing attention to the places where people come together.

Lee’s Gods Among Us represents the strong community that Scarborough is for so many. A community that Lee was born and raised in. A community that I call mine. I can imagine myself walking underneath the arch at Malvern Town Centre, feeling the sun's warmth shining down on me. Lee’s photographs cover the spaces between each beam, forming the walls of a community, a home.

Sabra Ismath is a writer and journalist based in Toronto. Her work appears in The Local, MobileSyrup, The Pigeon and various other publications. 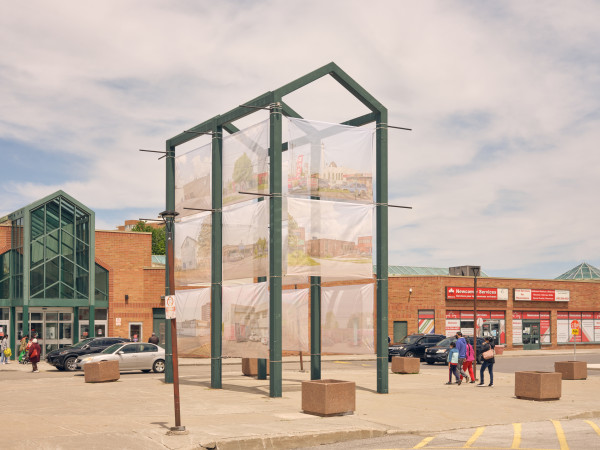