The Perils of Proximity

When I was asked to write something to accompany this exhibit, my initial thought was “I don’t have anything to say.” Which wasn’t true. Really what I feared was that I would have too much to say about a Black woman from the U.S. installing a provocative sculpture so close to the place I once called home. I left Toronto twenty years ago and, for the most part, have trained myself to stop picking at the scab; over time the edges have hardened, but the wound is still sticky at the centre.

Like many Black artists, Heather Hart and I chose to make Brooklyn our home. For me, the images of Northern Oracle on her website evoked multiple memories. I first recalled the words of VICE Media CEO and co-founder Shane Smith: “In Canada they trim the tallest trees.”1 That’s not exactly what he said, but that’s what I recall and repeat in my mind because it’s a phrase that confirms my own feelings of arrested development, growth curtailed, ambition axed.

My next recollection, far more obvious, was of Harriet Ann Jacobs and the “loophole of retreat” she describes in her 1861 memoir, Incidents in the Life of a Slave Girl. Jacobs hid in an attic for seven years to avoid capture after fleeing from her enslaver; through a hole in one of the wooden planks, she could see but never touch her children as they passed the storehouse where she lay hidden. Hart’s sculpture reminds me of Jacobs’s garret, as well as my own determination not to waste my youth feeling fearful and contained – able to see but never grasp the things I most desired.

Of course, I was never enslaved. I was merely a young Black woman in Canada who had a sense of her own worth and an opportunity to explore that potential by living below the 49th parallel. When I fled, I was neither wanted nor pursued; I was desperate but not a fugitive. In the U.S. I had family and ancestral roots, but what I craved most was autonomy – to no longer feel bound to, or by, my past. I wanted community and anonymity, the chance to strive alongside those who shared my interests and appearance. I wanted to enter a room without being asked, “Where are you from?”

Life for Blacks in the U.S. isn’t easy, and will likely become much harder under the new administration. Hart’s house submerged in soil brings to mind the victims of Hurricane Katrina who retreated to their attics and hacked through the roof with an axe, only to perch precariously in the hot sun for hours, awaiting rescue. In 2005 I accepted a teaching position at Louisiana State University and arrived in Baton Rouge two weeks before Katrina unleashed the deluge that wreaked havoc along the Gulf Coast. I chose the job at LSU over a chance to teach at a Canadian university, and loved ones in Toronto were sure I must have regretted my choice. I didn’t. I have never regretted my decision to leave Canada. For me, choosing life in the U.S. was an act of resistance; my green card makes me a “resident alien,” but estrangement and alienation are experiences I left behind in Toronto. Brooklyn is my heart – the first place I ever felt I truly belonged.

Hart’s installation disrupts the ordinary domestic landscape, and the second half of its title offers hope to those who feel trapped. “We Will Tear the Roof off the Mother” is a prediction/promise/threat that brings to mind the 1984 hip-hop anthem by Rock Master Scott & the Dynamic Three:

Those incendiary lyrics, delivered with such defiance, bring to mind another roof consumed by fire. In 1734 an enslaved Black woman was found responsible for nearly burning Montreal to the ground. Historians dispute whether Marie-Joseph Angélique was truly guilty, merely scapegoated, or tortured into confessing to the crime, but a child claimed to have witnessed her carrying a shovelful of coals up to the attic of her enslaver.2 I admit I prefer to think of Angélique acting with deliberate, murderous intent, simultaneously exacting revenge while clearing a path to the freedom she deserved but was denied.

Hart’s title also invokes Parliament’s “Give Up the Funk (Tear the Roof off the Sucker),” from their 1975 album Mothership Connection. Last month I saw the original Mothership on display at the new National Museum of African American History and Culture in Washington, D.C. Standing on the top floor, surrounded by centuries of artistic achievement – irrefutable proof of Black genius – I felt humbled, happy, and heartened. A few weeks earlier I had self-published my twentieth book for young readers, Milo’s Museum. It’s a story that represents my childhood in Canada as well as the reality for many kids of colour here in the U.S. today: a Black girl visits a museum with her class, only to find nothing in the exhibits that reflects the people in her community. Her grandfather says that museums “hold all the objects that people feel are valuable or important.” Milo’s aunt later explains the role of a curator in selecting those objects, and urges the little girl to act and not merely react to the exclusion she experienced. Milo then gathers her most cherished possessions and opens her own museum.

Middle schoolers in Toronto are also taking matters into their own hands, creating Black Girls Magazine in response to the invisibility they experience when reading mainstream publications. I remember driving around my neighbourhood as a teen, stopping at every Becker’s and Shoppers Drug Mart, desperate to find the latest issue of Essence. I usually had to drive several miles from my home in West Hill before I could find magazines (or makeup) designed for Black women. Canada’s proximity to the U.S. meant I always knew there was “a different world” for Blacks. This knowledge proved agonizing at times; I understood that life for African-Americans was far from perfect, yet I found my only mirrors in books, magazines, and television shows imported from the U.S. With no comparable cultural foundation in Canada, I let those alluring narratives guide me south.

“It is in a contemporary human’s nature to want to have an influence on their future,” Hart contends. I couldn’t agree more. A glass ceiling reveals those who’ve been permitted to rise above you, but an opaque roof like the one constructed by Hart more closely resembles the view I had of my own future in Canada. In the end, I traded a measure of security for the terrifying, exhilarating possibilities available to Black women in the U.S.

Another small brown face beams up at me. His hands hold out a copy of my historical fantasy novel Ship of Souls. I have signed at least a dozen books already and anticipate more requests since one hundred copies were distributed to children attending the youth program I just conducted with three other Black writers. I never met an author of any race when I was a child, and recognize the significance of this moment. Some kids ask for a hug, others request a photograph. My first picture book was published in 2008, but I still feel humbled by the look of awe on the faces of the young readers I meet.

As I bend down to write the inscription, from above I hear a woman’s voice ask, “What part of Canada are you from?”

I stop writing and look up. Next to this Black boy is a young woman with platinum-blond curls and magenta lips. I begin every author presentation by announcing that I’m an immigrant before asking the kids to name my country of origin. Unless they’ve been prepped in advance, it usually takes a number of guesses and hints before they say, “Canada.”

Because I don’t have to ask. She’s another Black woman from Canada who has found a way out. I can tell. It shows.

She laughs. “My job. I’ve only been living here for a few months.”

Another question I don’t need to ask. Because she’s brought this Black boy she loves to the Fifth Annual Black Comic Book Festival held at the Schomburg Center for Research in Black Culture, recently designated a National Historic Landmark by the outgoing first Black POTUS, Barack Obama. We are surrounded by a sea of Black creators, fans, and ecstatic children clutching books by and about people who look like them. These conditions don’t exist anywhere in the Great White North.

“I love it,” she says with a humble expression that, to me, reveals both relief and gratitude.

I hand the signed book back to the boy and say to us all, “Enjoy!” Meaning the festival. The country. The feeling of liberation I haven’t experienced anywhere else.

Perhaps one day kids all over Canada will grow up seeing work by Black Canadian women writers, performance artists, and sculptors in galleries and museums. For now, I know they will be inspired by the brilliance and daring of African-American artists Heather Hart and my dear friend Gabrielle Civil, who is indirectly responsible for my participation in this exhibit. I hope the accompanying conversations about Northern Oracle will “tear the roof off” the anti-Black bias embedded in too many of Canada’s cultural institutions. I hope more curators on both sides of the border will recognize their responsibility to exhibit art and artists that reflect the diverse world in which we live. 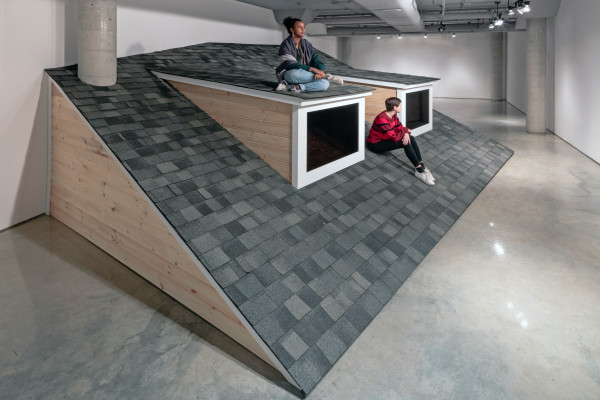