The various and distinctive traditions of Buddhism which have flourished in Asia until the present day subscribe to a common belief in samsara, an ongoing cycle of birth, decay, death and rebirth. Release from this ever-recurring cycle is, according to Buddhist belief, only possible through the conquest of desire, hate and ignorance, and through religious practice whose goal is enlightenment.

The symbolism and imagery of Buddhism were not only prevalent in the past, but also frequently appear in artists’ works today. As Buddhism, like many world religions, succumbs to an increasing trend towards secularization and participates in modern globalization, the image of the Buddha has been transformed into yet another icon of contemporary society’s popular culture. It has become a frequently used symbol, like Mao Tse-Tung and Marilyn Monroe, in contemporary art practice. As such, the Buddha has been changed into a worldly icon; he has descended from the supreme and efficacious place of the heavens to the chaotic and noisy mundane world.

The Television Buddha by Nam June Paik is a classic example of this transformation. When I first saw this work in Helsinki, Finland, twenty-five years ago, I was extremely impressed by the ingenuity of Paik’s use of the image of Buddha. His work created a dialogue and interaction between a statue of Buddha and a television monitor, exquisitely conveying the complicated relations between past and the present, East and West, religion and common customs, technology and spirituality. The work’s simplicity, clarity and tension were powerful, and remain as of yet, in my opinion, unmatched. Although the present exhibition does not include this work by Paik, the influence of his strategy on the present generation of artists, especially from Asia, is obvious.

Zhan Wang is one of China’s most outstanding contemporary artists. While studying at the Central Academy of Fine Arts in Beijing, he often travelled to temples in order to copy Buddhist images for his art practice. Debuting at the 2006 Shanghai Biennale, the original installation of Temple of Medicine was composed of two Buddha statues seated on a shrine, one made of Western medicinal pills and the other of traditional Chinese medicine products. The present exhibition showcases a new version of Temple of Western Medicine, a Buddha sculpted with hundreds of thousands of allopathic pills. From a distance, it is difficult to distinguish this work from a traditional sculpture of a calm and benevolent Buddha. Only by looking closer at Zhan Wang’s sculpture can one discover that it is constructed out of pills bearing brand names such as Aspirin.

Commenting on his work Zhan Wang notes, “I’ve always wanted to create one kind of art, it is this and it is also that. Actually, what this work represents is the connection between spirituality and materialism. For example, you can look at a pill and think about healing and curing sickness; at the same time you can see a Buddha and think about spiritual communication. It makes viewers contemplate the effect of combining materialism and spirituality.” The artist simultaneously creates an icon of spirituality, and a sharp condemnation of the excesses of Western materialism.

Liang Kegang’s Iron Guanyin Tea - Guanyin Buddha also employs the symbols of traditional culture for contemporary purposes. Founder of one of Beijing’s largest privately run art spaces, TS1, Liang Kegang is adept at using the language of unusual materials in order to deliver a critical message. One of his installations incorporated real money; exhibition visitors were astonished to see hundreds of thousands of Chinese yuan bills piled up in an open space. In another installation, he used tea leaves to construct a teapot, suggesting confusion of identity.

His work displayed in the present exhibition employs Iron Goddess of Mercy, a famous brand of Wulong tea from Fujian. It is said that the goddess of mercy came to a farmer in his dreams and led him to discover this type of tea. Another possible explanation for the name of the tea is that those who drank it benefited from improved health and longevity. The beneficial powers of the tea were then likened to the protection of the goddess Guan Yin. In his Iron Guanyin Tea - Guanyin Buddha, Kegang glues countless leaves of tea bearing this name into the shape of the goddess. The disarming but compelling simplicity of the work is reminiscent of the ancient tales of the Taoist philosopher Zhuangzi (Chuang Tzu) and his famous tale “Zhuangzi Dreamed he was a Butterfly Effect.”

Chen Yufan is a young Chinese artist, recently graduated from the China Academy of Art in Hangzhou. The series All Are the One, his graduation project, draws directly on Taoist philosophy and specifically Zhuangzi’s thoughts on “taking myriad things as one body.” In describing his work, in which he used an electric soldering iron to burn lines of tiny holes on paper, Chen Yufan notes, “During the process of dissolving shapes another virtual image was created, thereby constructing a form of hidden images that exist in the unity of representations in our life.” To him, Buddhist imagery emerges almost unconsciously, bestowing deep undertones of Zen principles to his work. The myriad here is, in fact, one.

If Chen Yufan’s work appears almost abstract, then the painting of his senior alumnus, Liu Dahong, operates in the realm of realism. During the New Wave movement of 1985, Liu challenged authority with his unconventional painting. Over the past twenty years, his work has continuously taken the history and contemporary reality of China as its subject matter. Liu’s style is free and imaginative, utilizing references and metaphors that transcend the borders of time and place to create a grotesque and bizarre world verging on the surreal. Buddhist Temple is his latest work and completes a series that also includes The Cathedral, The Memorial Hall of Mao and Confucius Temple. When the work was displayed at the ShContemporary International Art Fair held in Shanghai this September, it was deemed to be religiously improper and was censored by the authorities. This work, however, uses an extremely respectful and intuitive approach towards religion and documents the actual, distressing history of the temple. Using his keen and unique historical perspective, the artist recreates a painful visual recollection of these events on canvas.

Hye-Sun Baik, a Korean artist who previously studied at Tufts University in Boston, is a longtime resident of North America. In 1997, I invited three female artists of Asian descent, among them Hye-Sun Baik, who use paper as their medium to participate in a Vancouver exhibition, Pulp Matters. Both then and now, Hye-Sun’s handmade work with paper pulp possesses a unique, implicit and sensitive quality. She often adds ready-made objects to her work, such as placing a small Buddha in a composition of geometric forms, facing outside or turning inwards, thereby expressing her innermost being’s reaction to both the external and internal world. Hye-Sun Baik’s work combines movement with the serene, passion with peace, and evokes a state of meditation.

In comparison, San Francisco artist Michael Zheng’s work, Enlightenment Guaranteed, takes a more wry approach. Using Styrofoam, the artist creates a figure of Buddha with life-size legs in cloth jeans and leather shoes. This installation clearly addresses the artist’s own experience as an immigrant, as well as the internal conflict he experienced being caught between different cultural and religious heritages. After Zheng graduated from the prestigious Tsinghua University in Beijing, he relocated to Silicon Valley in the United States, where for a long time he was engaged in computer work. One day he abruptly decided to give up his career in the high-tech field in order to pursue art. Zheng’s works are usually conceptual and maintain the mark of a scientist’s logical thinking. The traditional conviction that “everyone can be a Buddha” was originally intended both as an encouragement on the path to self-perfection and as an admonition. In the work of Michael Zheng this axiom is interpreted anew with both humour and irony.

Ice Buddha Sculpture – Kyi Chu River is a collaborative work by the Tibetan artist Gade and the American photographer Jason Sangster. A series of photographs documents a 2006 performance by Gade. Using the water of the Kyi Chu River in the vicinity of the holy city of Lhasa, Tibet, the artist, by way of freezing, cast a sculpture of Shakyamuni Buddha. He then immersed the ice sculpture back into the Kyi Chu River, allowing it to slowly melt away. The water returned to its original source, and original state.

Gade believes that the transformation of water from a liquid to a solid state and, again, from a solid state back into a liquid, accurately conveys the Buddhist notion of impermanent changeability and samsara. While the artists photographed the ice Buddha dissolving into the river, a railway bridge over the Kyi Chu River was in the process of being built. Nowadays trains run nonstop to Lhasa, and the water from the melted ice sculpture of Buddha has long disappeared downstream, flowing far away.

Jongbum Choi is another artist from Korea who, in 2004, participated in the fifth Shanghai Biennale, which I co-curated. The audience of the Shanghai Biennale enjoyed watching Jongbum Choi’s virtual world of light and image that he creates with advanced imaging software. His multimedia installation Stage is in fact an audiovisual documentation of performance art which contains the artist’s family story. In the present exhibition, instead of performing live, the artist presents Stage as a continuously looping video projection. Swaying light beams and moving silhouettes construct a scene full of mystery that is discernible at one moment and gone the next. The music’s unceasing repetition induces a trancelike effect, suggesting the hallucinations of both this life and the next one, admonishing the viewer, as do Buddhist teachings, to recognize the transmigration of the soul.

In recent years, contemporary artists in Asia and in the Asian diaspora have recreated a variety of new bodies of work and thought, new interpretations of the teachings of Buddha through their practice. This exhibition presents some of these works and addresses the complex, fluid relationship between secular and sacred, past and present. 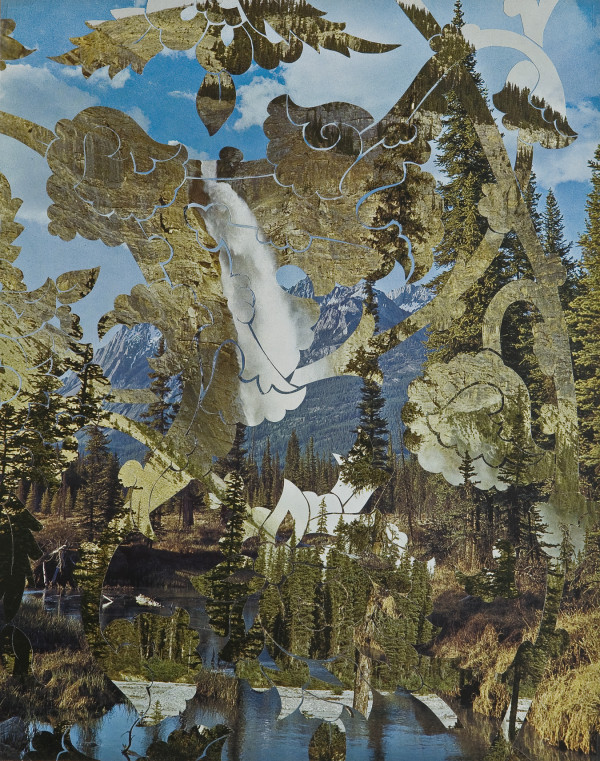 Stories for the Moment