Hannah Gadsby, in her recent stand-up comedy performance Nanette, deconstructs the nature of comedy to make several points. Possibly the most important is that humour depends on context: she says that a lesbian’s self-deprecating “joke” is, within homophobic patriarchy, not a form of humility but of “humiliation” – to make people laugh at her means she effectively remains marginalized.1 To be aware of context is to understand the potential that an instance of humour has to defamiliarize and subvert norms.

The artworks Wanda Nanibush has included in Nanabozho’s Sisters, all by Indigenous women from across Turtle Island, were made in the “post-colonial” context.2 Their multi-faceted uses of humour speak to Indigenous viewers, as many may recognize and relate to aspects of Indigenous experience within the present-day colonial context. It has been noted that Indigenous peoples’ humour is a form of resilience within and resistance to colonial oppression. Bruce Johansen says that “[h]umour has been a survival tool and a means of facilitating self-awareness and identity among Native Americans for centuries,” and that humour functions as “catharsis ... in the face of oppression, contemporary and historical.”3 Johansen quotes artist Bently Spang (Northern Cheyenne): “‘regardless of how the experts define the function of humour in my culture, the bottom line is that we are a pretty darn funny people. Humour has helped us deal with incredible adversity and hardship over the years and is still an integral part of life today.’”4 Artist Caroline Monnet (Algonquin, Quebecoise, and French) has a similar view: “There has been so much trauma and hardship in our history. How come we’re still there and we’re still able to have humour and laugh...? Is resilience a part of our protective shield?”5

While jokes might still be funny to the teller even when they “bomb,” their success does depend on both a skilled raconteur and a receptive listener; in other words, humour is social. Responses to humour are rooted in shared beliefs and/or values, as both Noël Carroll and Simon Critchley discuss.6

More crucial, perhaps, is that

by distancing us from [common sense], humour familiarizes us with a common world through its miniature strategies of defamiliarization. If humour recalls us to sensus communis, then it does this by momentarily pulling us out of common sense, where jokes function as moments of dissensus communis.7

Humour facilitates a new perspective, and situations once accepted as “normal” now seem strange, even against our values and beliefs – a situation such as colonialism, for example. For settler-viewers of the artworks in Nanabozho’s Sisters, then, humour’s defamiliarizing effects may prompt us to see colonialism as strange, even counter to our self-concept that Canadians are “nice,” not racist, etc.

The dialogic nature of humour may also facilitate an affinity between the artist as subject/agent and the settler-viewer as recipient/interpreter. As settler-viewers recognize the humour within these artworks, we come to share these Indigenous women’s perspectives, which is to step away from our settler perspective but also to be reminded of our complicit role within colonialism. The majority of these works involve self-portraiture, which contributes to settler-viewers’ recognition of the subject positions of these women, whose self-representation subverts stereotypes perpetuated within settler-colonial culture. Wanda Nanibush, discussing Rebecca Belmore’s performance art, has stated: “[t]he presence of an Indigenous woman’s body pushes through stories of victimhood to resilience and strength, it pushes through the overwhelming denigration of stereotypes.”8

Several works in Nanabozho’s Sisters use parody to defamiliarize both stereotypical representations of Indigenous women and colonialism. Parody, by Linda Hutcheon’s definition, is “a form of repetition with ironic critical distance, marking difference rather than similarity,” with “tension between the potentially conservative effect of repetition and the potentially revolutionary impact of difference.”9 Parody, whether humourous or not, also invites viewers to recognize the intentions of the artist as “encoding agent”10 – countering the ethos of post-structuralism, which posits the “death of the author” or artist and privileges the reader’s/viewer’s interpretations.11 The parodic work’s differences from the precursor artwork (or other cultural reference point) enable viewers to recognize the artist through recognizing her intentions. The differences render the precursor work, as well as the past and present socio-cultural context, strange – the incongruity of this defamiliarization might indeed be humourous.

Lori Blondeau (Cree, Salteaux, Métis) uses parody in Cosmosquaw (1996) to critique popular media representations of women in general, but also white-settler-dominated media representations of Indigenous women, as well as their exclusion/era- sure from these media. Blondeau dramatizes the typical Cosmopolitan magazine’s covergirl’s sexuality to the point of burlesque, both in the sense of an “absurd or comically exaggerated imitation,” and as the entertainment form that often involves scantily dressed women.12 While Cosmo covergirls are passive objects for the male gaze (and cater to the assumption that women wish to be the object of that gaze), Blondeau’s covergirl is active. By refusing passivity through mocking this stereotype, she resists objectification.

In keeping with the magazine cover form, Blondeau’s parody includes cover sells, one of which states: “10 Easy makeup tips for a killer Bingoface!” Departing from the usual exhortations to “seduce him,” this text implies readers who can’t afford an expensive “night on the town” – perhaps girls from the “rez” who frequent the bingo hall.13 Indigenous viewers of Blondeau’s work might laugh in recognition.14 Yet, settler-viewers are also assumed to want to look good for bingo, or to place themselves in the shoes of women who do. Here, then, through the incongruous and thus humourous reference to bingo, the settler-viewer potentially recognizes the position of the Indigenous artist. However, for low-waged Indigenous and non-Indigenous folks alike, bingo jackpots, like lottery tickets, enable fantasies of escaping harsh economic reality; bingo may also represent the cycles of poverty both economic and spiritual in some Indigenous communities brought about by colonial policies of cultural genocide. So while Cosmosquaw is humourous, the context sobers the tone.

Rebecca Belmore’s series Five Sisters (1995) can also be read as parody. These photographs mounted on wood are reminiscent of kitschy souvenir- type photos popular in the twentieth century.15 Wanda Nanibush recounts that many Indigenous homes, including her own, had these “wood-slice” images, which featured stereotypical “Indians” (e.g., an “Indian maiden”).16 Belmore retains the form of these photos but replaces the mythological “Indian” with a contemporary Indigenous woman, in locations that potentially challenge even as they allude to stereotypical representations. In one, Belmore crouches beneath a taxidermy moose. In another, her profile appears alongside that of a dark-skinned statue, as though inviting comparisons.

Belmore’s works offer subtle critiques. The stuffed moose might remind viewers of the effects of colonization and colonialism, including the fact that many animal populations have been reduced, and that the Crown’s disrespect for treaties has resulted in many Indigenous peoples being disconnected from traditions such as hunting. The profile with the fibreglass “Indian head” juxtaposes a stereotypical representation with a contemporary; here, the incongruous differences might provoke a response that is less amused than bemused. For settler-viewers, Belmore’s parodic photos, in offering a counter-narrative to stereotypes, may defamiliarize not only those stereotypical representations of Indigenous peoples but also themselves as settler-Canadians: if Indigenous women are not who I thought they were, then who am I?

Humour in Indigenous art might be understood as a kind of “counting coup.” Originally, this involved “striking an enemy” with the hand, a weapon, or a “coupstick” during “intertribal” warfare in the region known as the Great Plains and was considered a demonstration of courage. With the spread of colonialism across Turtle Island, counting coup was also used in clashes with “American troops.”18 According to Brian Noble, associate professor in Dalhousie University’s Department of Sociology and Social Anthropology, it also took other forms: the colonizer’s shirt or buckled belt, for example, enabled the wearer to “[take] on some of the rival’s power [while] inviting them to ... join into a good relationship.”19 When parodic humour targets colonialism, it “touches” the rival (settler-Canadians) not physically but perhaps emotionally. For Indigenous peoples, humour may indeed be a form of resilience and a means of reclaiming power. But it also emphasizes relationship, in requiring a response from settler-viewers – whether wry laughter or ontological discomfort.

When settler-viewers share the humour presented in the works in Nanabozho’s Sisters, we effectively accept the invitation “to join into a good relationship.” But this is just the first step. Simon Critchley says, “If humour tells you something about who you are, then it might be a reminder that you are perhaps not the person you would like to be. ... [H]umour might ... contain an in- direct appeal that this place stands in need of change.”20 Settler-viewers, seeing themselves from a new perspective as aspects of colonialism are defamiliarized, might also begin to see that the Canadian “ideal” doesn’t quite line up with reality, and that this place called Canada needs to be transformed – to be decolonized, perhaps through the humour integral to these women’s artworks.

Jane Affleck is a writer, artist, and part-time instructor at NSCAD University in Halifax, Nova Scotia. Her writing has appeared in several Canadian arts and culture magazines, including C Magazine. 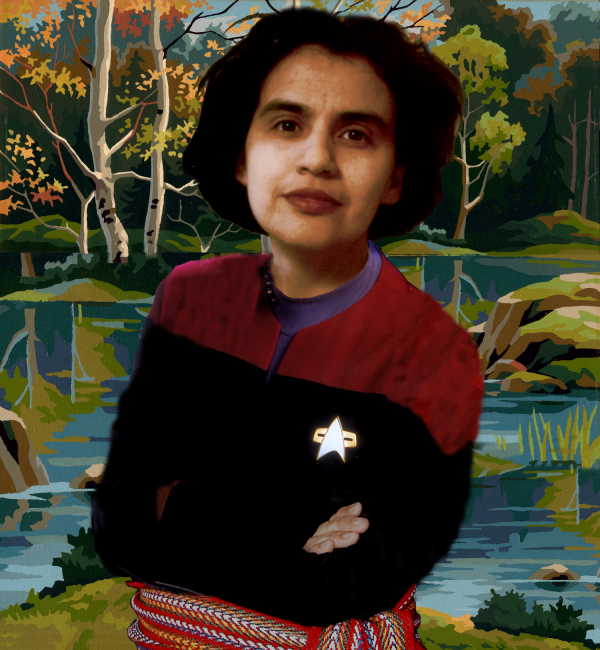 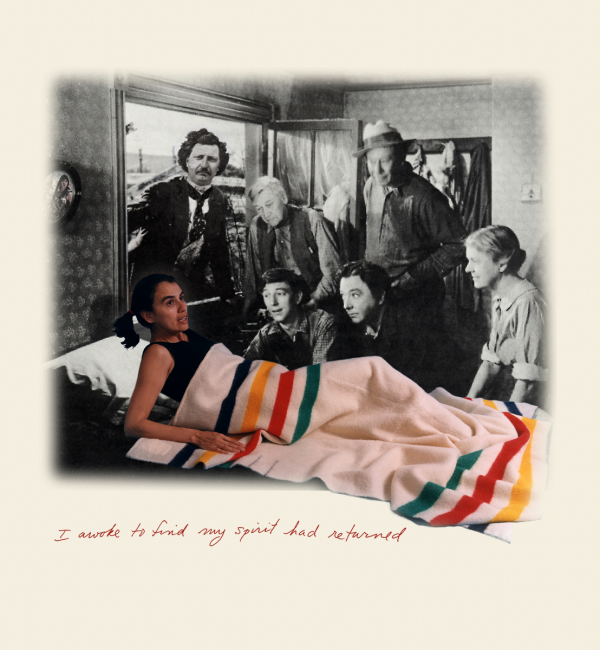