Working together, the Doris McCarthy Gallery and Dr. Nick Eyles from the Department of Physical and Environmental Sciences at the University of Toronto Scarborough offer artistic and scientific perspectives on the Canadian Shield. This rugged iconic landscape lies at the heart of our country and is made of Precambrian rock recording an enormous slice of planetary history – its oldest parts are more than 4 billion years old, its youngest a billion years. Presented alongside Dr. Eyles’s research is work by Canadian contemporary artists Ed Bartram and Lisa Myers. Bartram and Myers share the Canadian Shield as their subject, incorporating the unique surface of the rock in their print- and video-based work.

Bartram has been documenting the abstract forms of the Canadian Shield and its surrounding natural beauty for over fifty years. His landscape prints, Rolling Rocks, Northern Image Series, To the South, Sans Souci Series, and Island North, each foreground the bold striations in the rock leading to the fresh waters of Georgian Bay. The landscape of Georgian Bay – specifically the repeated, undulating line of the Precambrian rocks – forms the subject matter of a great deal of Bartram’s work.

Myers, a member of Beausoleil First Nation, is an independent curator and artist working in printmaking, stop-motion animation, and performance. Her video Still Here shows the shadow of a figure walking along the rock, its surface seen in detail. Myers says, “In the video loop I present a shadow figure that moves and stops in a Canadian Shield landscape. At times the figure remains stationary and hides in the landscape. In this way, the subject of the video plays with these moments of stasis to question depictions of Canadian landscape as untouched, pure, and uninhabited.” 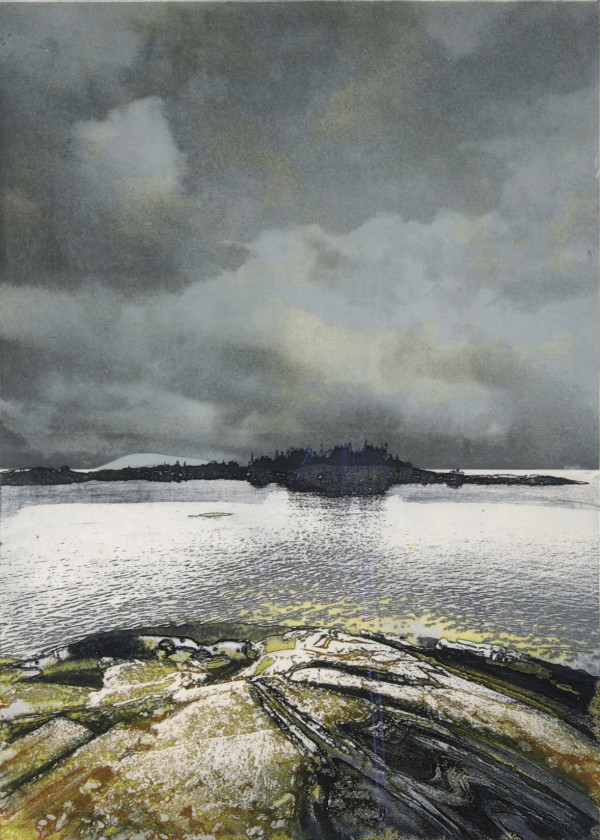 Ed Bartram received a Bachelor of Arts from the University of Western Ontario and a Master of Fine Arts from the University of Toronto. Bartram was Printmaking Instructor at Central Technical School, Toronto (1971-1986) and Intaglio Instructor at The Ontario College of Art, Toronto (1985-2003). His work can be found in numerous public, corporate and private collections in North America, Europe and Asia including the Art Gallery of Hamilton, Art Gallery of Ontario, Museum London, and the Tom Thomson Art Gallery. Bartram's work has been exhibited extensively including solo exhibitions at the Justina Barnicke Gallery and the McMichael Canadian Art Collection. He has received a number of awards for his work and is a member of the Ontario Society of Artists and the Royal Canadian Academy of Arts. He lives and works in King City and Georgian Bay.

Lisa Myers is an independent curator and artist with a keen interest in interdisciplinary collaboration. Her Mother's family is Anishinaabe and French from Shawanaga and Beausoleil First Nation in the Georgian Bay region, and her Dad is from English and Austrian ancestry who settled in southern Ontario. In 2011, Myers earned her Master of Fine Arts in Criticism and Curatorial practice from OCAD University, which focused on the use of food in Indigenous art practice. She has exhibited her work in solo and group exhibitions in venues including Urban Shaman (Winnipeg), Art Gallery of Peterborough and the Art Gallery of Ontario. Her writing has been published in Senses and Society, C Magazine and FUSE Magazine and she is an assistant lecturer in the Faculty of Environmental Studies at York University. She works and lives in Port Severn and Toronto, Ontario.