The image of Buddha has been the most important ritual item representing one of the great religions in history. Today Buddha images are still found almost everywhere in the world, but they are not necessarily affiliated with Buddhism and its religious values.

The reincarnation or resurrection of Buddha reflects the tremendous changes that have occurred in our society. The iconic perceptions of Buddha vary and play completely different roles in different cultures. Buddha is no longer a symbol of one belief but a visual form that fosters questions rather than answers.

Through painting, sculpture, video installation and photography by artists from China, the United States, Tibet, and Korea, Reincarnation demonstrates how Buddhist imagery has been adopted in contemporary art practice and how close it is to our daily life in the context of globalization. 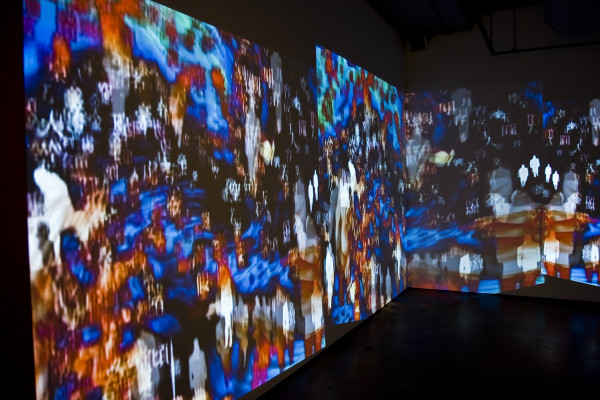 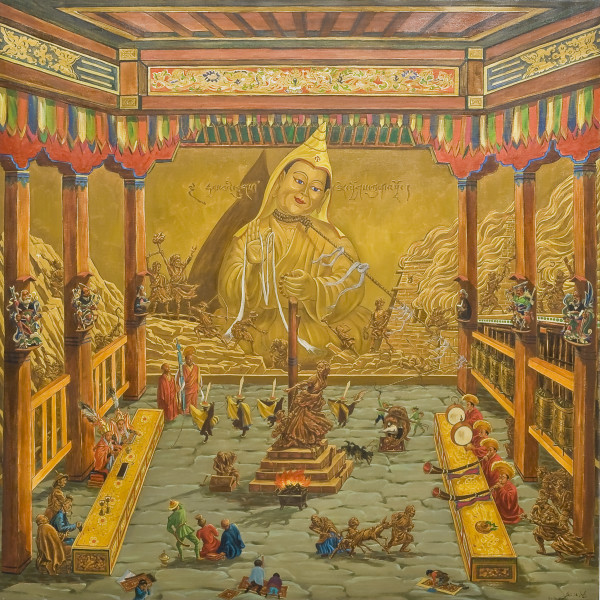 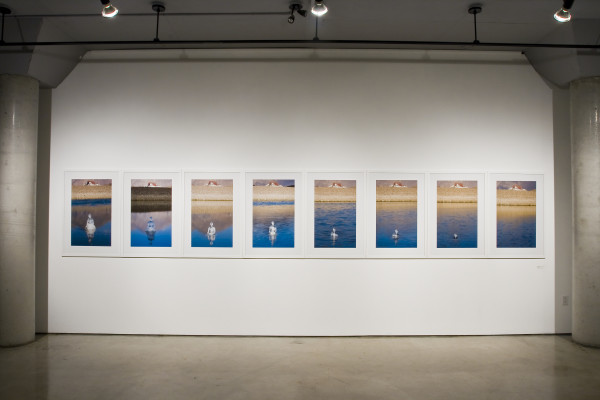 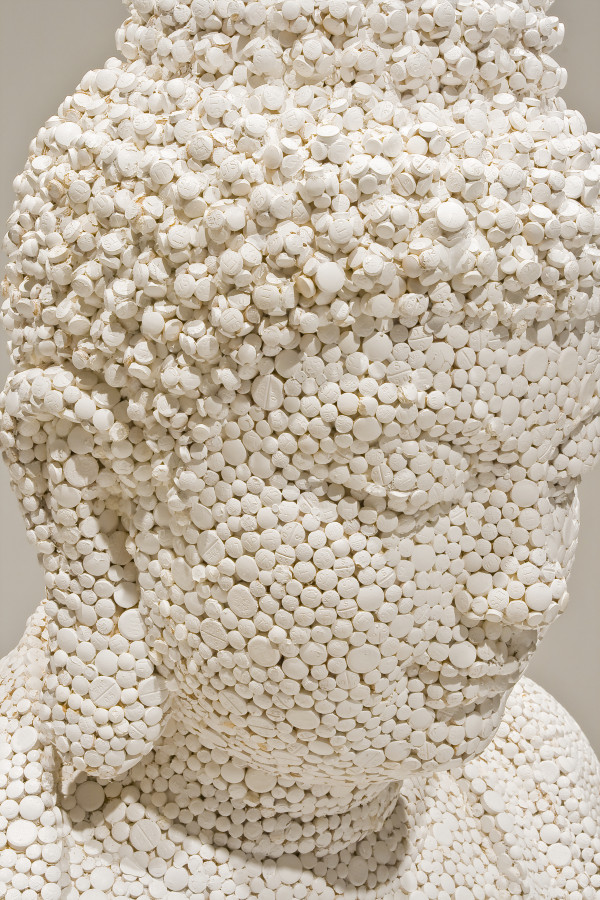 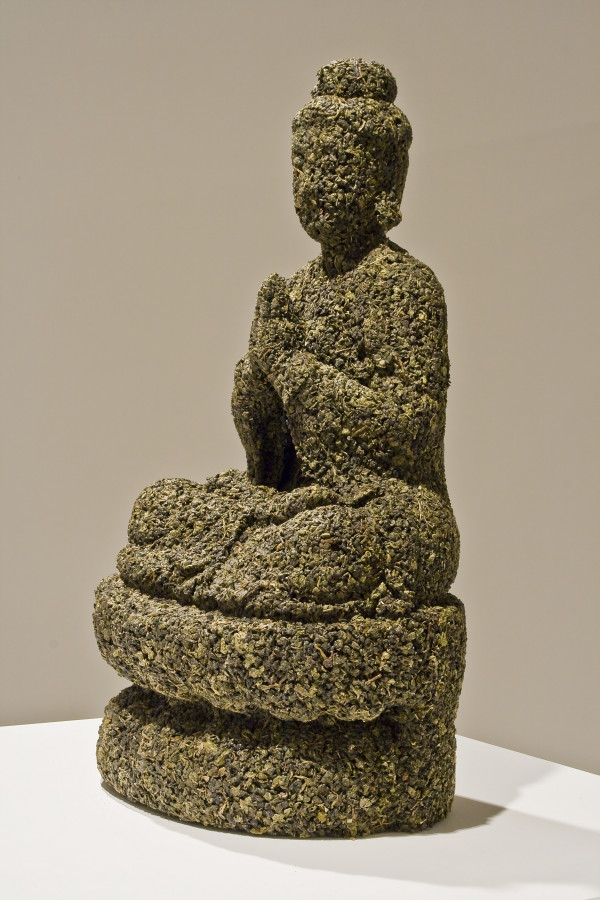 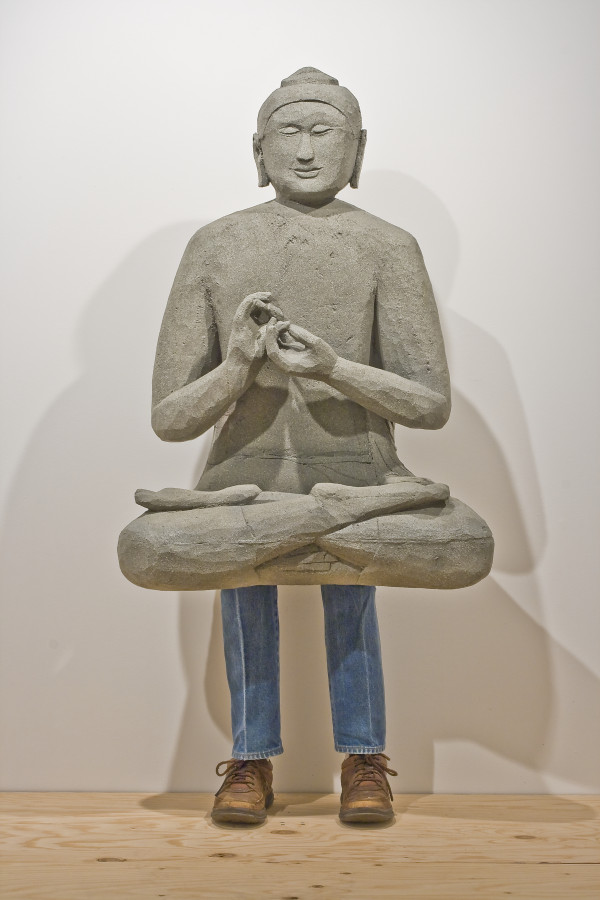 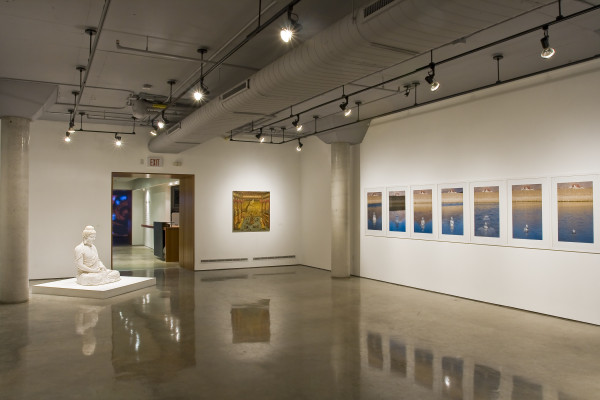 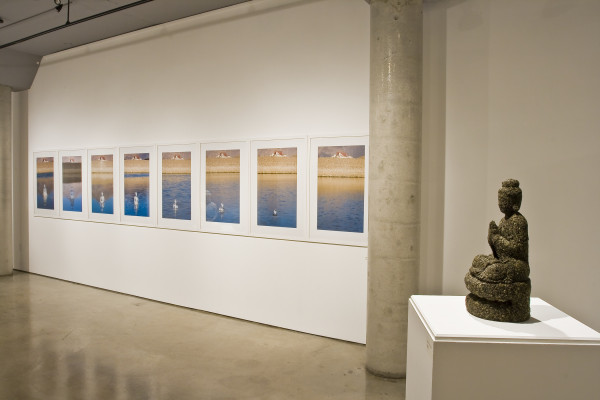 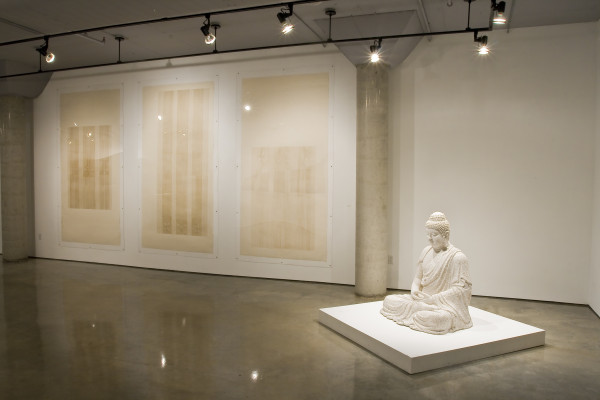 Zhan Wang is a Beijing based artist. Primarily a sculptor, he has exhibited his work extensively both nationally and internationally, including New Zealand, France, Singapore, Italy and Japan. Continuing to practice in Beijing, as well as teach at the Central Academy of Fine Arts, Zhan has participated in group exhibitions such as “Transience: Chinese Experimental Art at the End of the Twentieth Century” (1999), at The Smart Museum of Art, Chicago, the Shanghai Biennale (2000), Shanghai, and “Open 2000”, at the International Exhibition of Sculpture and Installations (2000) in Venice, Italy.

Liu Dahong is Beijing based painter, who works primarily in the realm of realism. During the New Wave movement of 1985, Liu challenged authority with his unconventional painting. Over the past twenty years, his work has continuously taken the history and contemporary reality of China as its subject matter. Liu’s style is free and imaginative, utilizing references and metaphors that transcend the borders of time and place to create a grotesque and bizarre world verging on the surreal.

Hye Sun Baik has been working professionally as a mixed media artist since 1988. She uses a variety of Eastern and Western signs, symbols and found objects to express her personal commitment and boundless energy in integrating the two cultures that she lives in. Combining her love of fiber with mixed media on hand made paper, Hye Sun Baik’s work is innovative, and imaginative. She is represented in art galleries in Asia, Canada and the US, also at International Art expositions in Chicago, New York, San Francisco and Basel (Switzerland.) She divides her time between Chicago and Seoul.

Gade is a founding member of the Gedun Choephel Artists’ Guild. His works have won various prizes in Chinese exhibitions; he has also exhibited in countries such as Japan and Malaysia. In 2001-2 he became ‘Artist in Residence’ in New York; in 2003 he was ‘Artist in Residence’ at the Taigh Chearsabhagh Museum and Art Centre in Scotland.

Michael Zheng is a San Francisco based artist. Born and raised in China, he studied Computer Science in both China and U.S. He later attended the San Francisco Art Institute, where he studied with Paul Kos, Tony Labat and John Roloff. Michael Zheng's artistic and philosophical concern is rooted in his Taoist and Buddhist heritage. His work is conceptually based and often takes the form of site-specific installation, sculpture or performance. His interest focuses on bringing awareness to how our perception of reality is influenced by the phenomenological, cultural and political conditioning. Michael Zheng has exhibited his work nationally and internationally, including an intervention project “Art For Sale!” with the 9th Baltic Triennial of International Art at the ICA in London; “Portland Museum of Art Biennial” in Maine; and the ERNST Museum in Budapest, Hungary, all 2005. He has just participated in the VierWände Kunst (Four Walls Art Festival) in Düsseldorf, Germany in 2007.

Liang Kegang is an artist and architect based in Beijing. A graduate of Qingdao Architecture Engineering University, he has been working in both disciplines for two decades. In 2005, he founded TS1 Contemporary Art Commune and TS1 Art Museum, which become the largest non-stated owned art museum in Beijing. Liang Kegang is adept at using the language of unusual materials in order to deliver a critical message.

Jason Sangster has shot feature assignments covering a wide array of subjects, including basic education for girls in post-Taliban Afghanistan, AIDS orphans in Rwanda, reforestation & land rights issues in the Amazon basin of Ecuador, modern life in Tibet, and post conflict reconstruction in both Ethiopia and Tajikistan. From 2001 until 2005, Jason worked as the principal photographer and photo editor for the international relief and development organization CARE. Currently, Jason is working on several long term projects as an independent photographer based in Lhasa, Tibet (China). His work is featured in the majority of CARE's recent publications.  His other clients include National Geographic, The New York Times and The San Francisco Chronicle. He earned his Bachelor's of Arts in Photography with a double minor in Anthropology and Religion from the University of Georgia.