Anthony Gebrehiwot is a passionate photographer and community leader, whose creative lens re-visions photography as an ongoing dialogue of social change between subject and society.

Gebrehiwot seeks to communicate without language in an intimate and vulnerable way. Through photography, he portrays the vocabulary of race, masculinity, history, perception, and vulnerability. His latest series titled From Boys To Men: The Road To Healing, is a visceral display of Black masculinity. The series exposes the necessary labour of unpacking learned behavior attached to childhood trauma. While using the combination of contrasting landscapes, Black bodies, and raw human emotion, Gebrehiwot explores the affective power of Black bodies in confronting the viewer's humanity and empathy. The photographs, (arranged in a non- narrative configuration), aim to destabilize the distinction between past, present, and future. Gebrehiwot's unique visual language extends across temporal sensibilities, to trace the thread of trauma to the root. The metaphors meant through the selection of colour, texture, and emotional expression encourage the viewer to place themself within the poetry of masculine fragility.

His artistic exploration stems from his work with Black/pan-African diaspora communities in Toronto. As the resident photographer at R.I.S.E. Edutainment (Reaching Intelligent Souls Everywhere), Gebrehiwot has intimately witnessed and documented the creative and unguarded evolutions of poets, musicians, and artists from across the city. Based in Scarborough, Gebrehiwot has worked to bring photography to youth in communities through organizations like the NIA Centre, The Power Plant, and Toronto Community Housing. His connection to youth and community, combined with his sustained self-dissection and constant desire to evolve, has helped him to identify masculinity as a focal topic for photographic inquiry. His artistic exploration of masculinity stems from community conversations on toxic masculinity, in addition to his own self-analysis of past relationships. Gebrehiwot identified the healing of the inner child as a seminal experience necessary to embrace and understand the hardened and misunderstood spaces of the heart and soul.

Through self-inquiry-based photography, Gebrehiwot engages in tracing emotional triggers to the root wound. His work shines a light on the space and emptiness in the psyche of the Black man — a void created by suffering, love lost, intimacy refused, and humanity denied. In this series, Gebrehiwot subtly traces triggers including: toxicity, possessiveness, dominance, sexuality, the feminine nature duality, the fear of death, the courage of creative expression, and Black identity politics. He challenges the viewer to look critically at traditional norms of masculinity to reconfigure the rules to make space for healing — ultimately leading to a more open heart. Gebrehiwot offers this urgent work because Black men have many social pressures to overcome and dismantle due to the intersectionalities of race, gender, patriarchy, and class.

The photographs unearth the fear associated with embodying the Black male identity in the context of an ever-awakening social consciousness. As a result, these pictures link various socio-political contexts and histories in an attempt to comprehend and criticize the present moment. They serve as a political commentary on contemporary conversations on race and oppression in the Americas. Gebrehiwot's translation from the intimate and psychological into the bold and intentional demonstrates his conviction that redemption and healing can be achieved through imagery, without being explicit or instructive. He does not wish to prescribe the perfect way to heal. Instead, he demonstrates that the inner child within Black men is always worth holding closely and carefully. 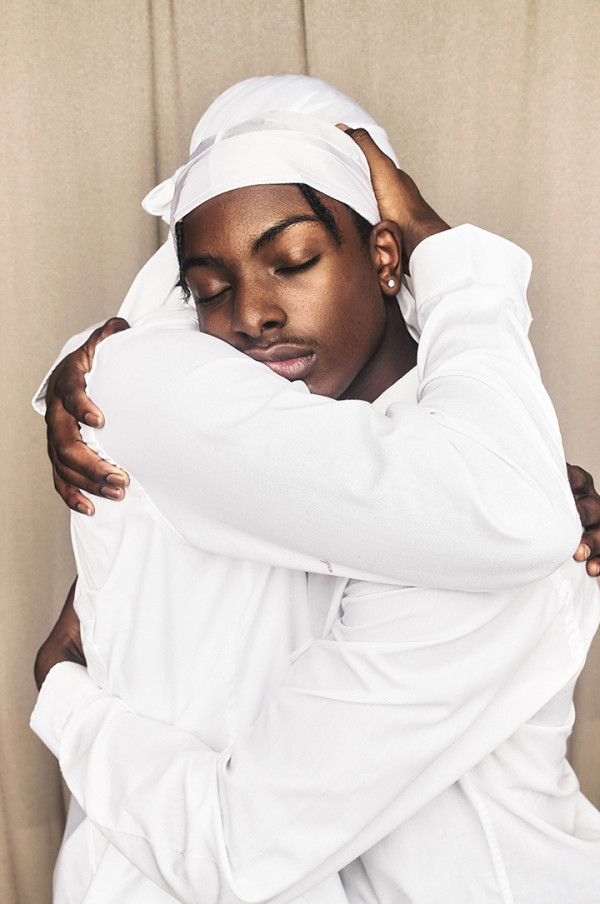